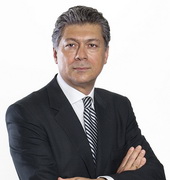 Panagiotis Mihalos has broad and extensive experience in the business, investment and political arenas, united by one common objective: promoting economic growth, national development, business partnerships and investment, in Greece, the greater region of Southeast Europe, the Middle East and beyond.

Following his studies in Mathematics and Economics (B.Sc.), then Finance and Business Administration (MBA) at the City University of New York, he began his professional career in Finance and Marketing in the United States, spending 10 years with J. E. Seagram & Sons Inc. in New York.

In 1993, in Athens, he founded Southeast Real Estate SA and, in 2002, founded Soros Real Estate Partners, to invest in Greece and Southeast Europe. Panagiotis has been a pro-active real estate and investment professional in Greece and the region, encouraging the modernization of the industry through his efforts as a business catalyst, both in his own organizations and in trade associations.

In 2007 Mr. Mihalos was elected President of the Hellenic Entrepreneurs Association (EENE), of which he remains Honorary President, playing a pivotal role in the institutional development and international networking of the Greek entrepreneurial community.
In 1990 he joined the cabinet of Antonis Samaras, then Minister of Foreign Affairs and later Prime Minister of the Hellenic Republic.

Mr. Mihalos is Honorary President of the Hellenic Entrepreneurs Association (EENE), is President of the newly formed Business Councils: Greece – Kuwait, Greece – Qatar, Greece – UAE and Greece – Saudi Arabia, Vice Chairman of the US – Greece Business Council, Secretary General of the Greece -Turkey Business Council, ex Member of the Board of the Hellenic Centre for European Studies, Member of the Commercial and Industrial Chamber of Commerce, Member and former Board Member of the American-Hellenic Chamber of Commerce, Member of RICS, Guest Lecturer at Johns Hopkins University, Washington DC, USA, in International Real Estate, Masters of Science Department and Founding Member of the Board of the Greek Foundation for the Repatriation of Greeks Abroad.

He is married to Christina Karantani and they have a daughter.